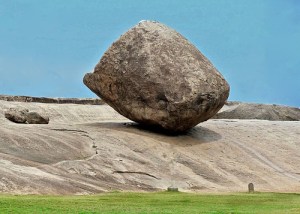 Anyone sung the following hymn line from “Come Thou Fount” recently?

Here I raise my Ebenezer;
Hither by Thy help I’m come;
And I hope, by Thy good pleasure,
Safely to arrive at home.

The word Ebenezer there is a reference to 1 Samuel 7:12, where the prophet Samuel takes a stone and names it “the stone of help”, for he said, “Till now the Lord has helped us.” When understood, it’s a great reminder that God’s faithful to his people throughout biblical history.

Russell Moore recently tweeted the following about it:

Every time a worship leader takes “Here I raise mine Ebenezer” out of “Come Thou Fount,” an angel loses his wings.

Which sparked a conversation about whether song leaders should change obscure words in hymns, or teach them what they mean each time:

Following this exchange, Stephen Altrogge fleshed out in a blog post why he errs on the side of Biblical illiteracy, and makes his case for dropping words like Ebenezer. He shares:

…the reality is, our culture is becoming more and more Bible illiterate. Words that once were commonly understood are no longer used. We can’t assume that our friends, coworkers, and fellow students understand what we mean by traditional Bible words, such as “repent”, “sin”, and “forgiveness”. We can’t assume people understand what we’re talking about when we use Bible-rich words like “propitiation” and “justification”. These aren’t commonly used words in our culture anymore. There is no moral majority. We are living in a post-modern, post-Bible culture that doesn’t have a shared repository of religious words.

The more biblically literate might argue that it’s a false choice to say people can’t learn about justification, sanctification and Ebenezer. I agree we shouldn’t underestimate the ability to understand Biblical allusions, but we don’t want to presume on people understanding them either.

So some Sundays I’ve taken the time to explain words and phrases that are unclear (it’s even better when our pastors would do this). It usually only needs to take half a minute and can be immensely beneficial.

Here’s two points I think was missing from the conversation.

1. Come Thou Fount has always had more variations than we realise.

The original hymn includes five verses, but most modern versions use only the first three. There are a few common word changes in different versions. In some texts, instead of “Here I find my greatest treasure,” (Psalter Hymnal) the first line of verse two reads “Here I raise mine Ebenezer,” a reference to 1 Samuel 7:12, in which Samuel sets up a stone and names it Ebenezer meaning “The Lord has helped us” (Episcopal Hymnal, Presbyterian Hymnal, Baptist Hymnal, Methodist Hymnal). As well, the last line of the second stanza can be read “Interposed his precious blood” or “bought me with his precious blood.” The two verbs signify different metaphors of the atonement of Christ.

So most of our hymnals and arrangements don’t even use Robert Robinson’s original 5-verse text anyways. Hymnal collections adapted the words for the audiences in their time (e.g. “Here by Thy great help I’ve come” to “Hither by Thy help I’m come”), and others have done the same in recent years to make the words more understandable.

Unless you’re singing word-for-word from the Bible, the words in our hymn books and song sheets weren’t breathed out by God. So let’s not treat them that way.

Granted, I think it’s important to sing lyrics consistently to help the words dwell in us easily (when our eyesight fails and our bones grow weary, having songs memorised can be a real encouragement). I probably won’t help my church family if  I’m flipping the words to our hymns every other week.

But if some hymn lyrics we’re asking our brothers and sisters to memorise are too archaic or too obscure, I think we have an opportunity to change them so that they better communicate the Scriptures. That’s what drove hymn writers like Isaac Watts went against the grain in his time, and rewrote metrical psalms to help people understand and connect emotionally to what they sang.

So I think it’s in the same spirit that we adapt the language of hymns for the sake of modern congregations.

Of course, we should change words to hymns with care and sensitivity: care for an accurate meaning, and sensitivity to the needs of your particular church family. Children, visitors, new Christians, old Christians, English-as-second-language Christians will all benefit from better understanding what we sing.

So in conclusion, I think I’m in agreement with Stephen on this question (thanks for raising the topic!), and see no problem with changing hymn lyrics with care and sensitivity. How about you?

How to revise hymns without destroying them – Bobby Gilles talks about the balance between when to revise and when not to revise lyrics.

One thought on “Raising my Ebenezer and changing hymn lyrics”

W is a student and freelance writer at Clever Whale Concepts.
C is a stay-at-home mum and artist/web designer.
E, H and R keep things fun at mealtimes.