One of my favourite things about Wayne Grudem’s Systematic Theology (Zondervan, 1994) is that each one of his chapters ends with a hymn in response. It’s a great way to model that good theology leads to doxology; studying God leads to praising Him.

I decided to come up with my own updated list of songs for each chapter – not because I didn’t like those Dr Grudem suggested, but because since 1995 there have been a range of new worship songs written and hymns retuned that are worth adding to the mix. We can be grateful for a new generation of songwriters like the Gettys, Stuart Townend, Sovereign Grace Music, CityAlight, and artists who have taken timeless hymns and arranged them for the next generation.

You could use this list (compiled into a Spotify playlist here) for your own listening and edification, or in tandem with reading and studying each chapter. Even better, you could come up with your own song list to accompany Grudem, or another systematic theology!

Here’s a full list with links to either a video or words so you can listen and respond to theology with praise!

Honourable mentions (either couldn’t find them on Spotify, they were so good they covered multiple chapters, or just had to pick one!)

When was the last time you remember singing about God’s wrath? If the modern hymn “In Christ Alone” is in your playlist, then it was probably more recently that you realised.

“In Christ Alone” was the first hymn that writers Stuart Townsend and Keith Getty produced together, and to this day, it remains their most well known. Since its release in 2001, “In Christ Alone” has been referred to as “surely the worship song of the century so far.” The song has been covered by scores of artists including Owl City, David Archuleta, and Natalie Grant, and has been translated into several different languages.

The hymn takes a linear approach in unfolding the gospel narrative (the life, death, and resurrection of Christ). The first verse introduces Christ as solid ground, a cornerstone that we can find safety and refuge in. In the same way that stonemasons in biblical times relied on the precise placement of a cornerstone to set the foundation for every other stone, Christ promises to be “a cornerstone chosen and precious” (1 Peter 2:6) that we can rest every triumph and tragedy upon.

The second verse invites us to gaze at the wonder of the incarnation—the fullness of God in human form—before zooming into the life and death of Jesus. Despised and rejected by the people he came to save, the Messiah willingly poured himself out during the drama of the cross, where gruesome death and sacrificial love satisfied God’s righteous anger that our sins deserve (Romans 3:21-26, Romans 5:9).

The third verse begins with gloom of the tomb, but gives way to unabashed celebration of the risen Christ. The melody climaxes alongside triumphant news: Jesus is alive, victorious over death! We can now have the confidence to claim him as our own! The resurrection proves that sin’s death grip no longer remains: “…for as all die in Adam, so all will be made alive in Christ” (1 Corinthians 15:22).

Powerful stories demand a response. In the final verse, we are invited to sing our reaction to the good news of Jesus. His unmatched power provides assurance that guilt need not plague us, death need not scare us, and hell can never take us: there simply is “no condemnation for those who are in Christ Jesus” (Romans 8:1). With King Jesus in command of our destiny, we stand with confidence, awaiting the day we finally meet him face-to-face.

Just as a diamond’s brilliance and sparkle depends on the number and placement of its many facets, God’s beauty shines most brightly in light of his many facets. In 2013, one of these aspects came under scrutiny when the American Presbyterian Committee on Congregational Song voted to exclude “In Christ Alone” from its hymnal, in light of the words in verse two, which speak about God’s wrath being satisfied. The decision attracted media interest and sparked a firestorm of controversy. There was much wrath about God’s wrath: some criticised the hymn writers for not allowing a change to the lyrics, while others accused the hymn committee of holding an unbiblical view of God.

Talk about God’s wrath brings unsettling images to the minds of 21st century Kiwis. We rightly reject caricatures of God having the uncontrollable anger of Jake “The Muss” from Once Were Warriors, or spewing forth hateful words at protest marches. Yet God’s wrath—revealed in the Bible—means God was willing to confront the cancer of sin hollowing out his beloved image-bearers, and Christ was willing to absorb the consequences of this cancer in our place. Without it, God’s love becomes saccharine and ill-equipped to respond to the horrors of human sin; whether anti-Semitic violence, or our own Samaritan blind spots; whether selfish exploitation of workers, or our own self-absorbed materialism.

That’s why when we sing about the wrath of God, we actually sing about ourselves: sinners in need of the rescue that Jesus willingly offers on the cross. To minimise any one of God’s attributes from our vocabulary is to rob ourselves of the full brilliance of God’s beauty, and to make Christ’s sacrifice less costly.

“In Christ Alone” depicts a God not made in our own image, but as he presents himself in the Biblical story: beyond us yet with us; holy yet gracious; angry yet loving; just yet merciful. And all of it is worth singing about.

These were the first two words that Anna Spafford telegrammed her husband, Horatio, after the ship that she and her four daughters were on sank in a shipwreck that claimed 232 lives – including their four daughters. In the small hours of November 22nd 1873, the transatlantic steamer Ville du Havre collided with another iron sailing vessel. Passengers tumbled and fell. There was darkness and confusion. Within two hours, the entire ship had perished beneath the waves.

As a grief-stricken Horatio sailed across the Atlantic to reunite with his wife in Europe, the ship’s captain called him aside and informed him that they were now passing over the place where the Ville du Havre went down. Overcome with grief, Horatio retired to his cabin and poured out the words which have become one of the church’s most beloved hymns, “It is Well with my Soul.”

The story behind this hymn is retold over and over again by preachers and hymn enthusiasts as an example of firm faith in God during difficult times.

Let’s take a closer look at the hymn…

Like Loading...
It was a joy over the weekend to serve at the first Edify Conference, hosted at our home church (Howick Baptist). We had a great time opening the Word and considering the importance of what we do when we sing together as the gathered church.

Cheryl and I were in Sydney for Emu Music’s Word in Song Conference last year, and in 2011 got to attend the WorshipGod conference hosted by Bob Kauflin. And after talking about the idea of a music / gathered worship conference on and off for years, it was great to finally have a go at hosting one in NZ ourselves in partnership with Rowan Hilsden and the team at Auckland EV.

It was also neat to meet and get to know Greg Cooper, a songwriter and musician from Sydney who served on the Edify band on Friday night and led several workshops on Saturday. I personally learned a lot from observing and considering how skillfully he played the guitar – in a way that served the band and supported the church singing. I also loved his servant-hearted attitude and easy-going nature.

I enjoyed playing guitar and sing in the Edify bands – once on Friday with a full band, and again on Saturday morning with a stripped-back, acoustic team. It was good to have a go at modelling congregational church music for different contexts.

A few people asked for the songs we sang over the weekend, so here is the set list below: 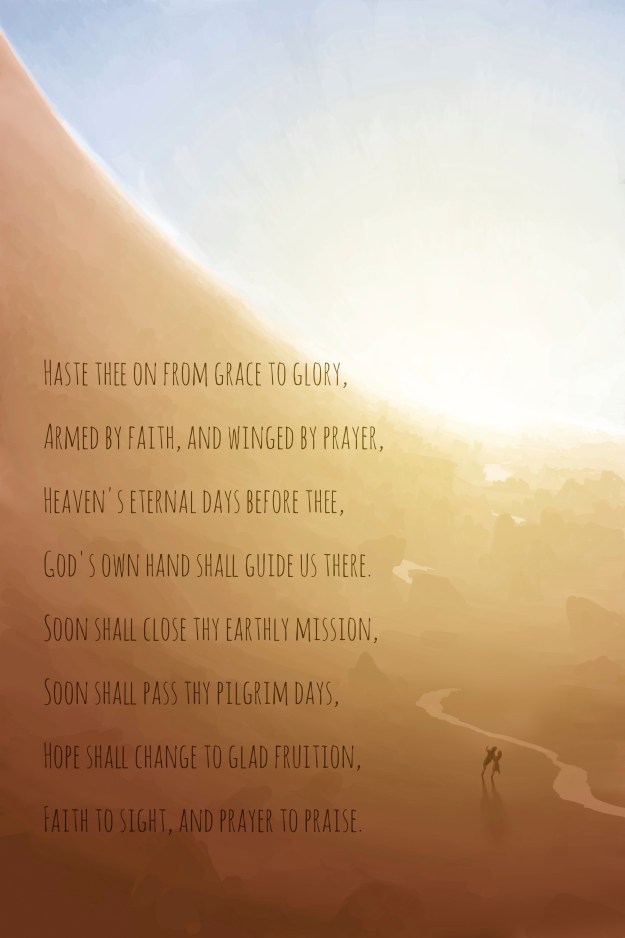 Artwork by Cheryl Chong. Lyrics from the hymn Jesus I My Cross Have Taken (the Indelible Grace version is our favourite).

We gave a print of this to the Fleener family as a goodbye present. I (William) think it’s a hymn lyric that captures the hope of eternity that helps us to press on in sacrifice – whether it’s moving to the ends of the earth to preach the gospel, or staying in your neighbourhood to do the same.

Go, then, earthly fame and treasure,
Come disaster, scorn and pain
In Thy service, pain is pleasure,
With Thy favor, loss is gain
I have called Thee Abba Father,
I have stayed my heart on Thee
Storms may howl, and clouds may gather;
All must work for good to me.


Soul, then know thy full salvation
Rise oer sin and fear and care
Joy to find in every station,
Something still to do or bear.
Think what Spirit dwells within thee,
Think what Fathers smiles are thine,
Think that Jesus died to win thee,
Child of heaven, canst thou repine.


Haste thee on from grace to glory,
Armed by faith, and winged by prayer.
Heavens eternal days before thee,
Gods own hand shall guide us there.
Soon shall close thy earthly mission,
Soon shall pass thy pilgrim days,
Hope shall change to glad fruition,
Faith to sight, and prayer to praise!

W is a student and freelance writer at Clever Whale Concepts.
C is a stay-at-home mum and artist/web designer.
E, H and R keep things fun at mealtimes.